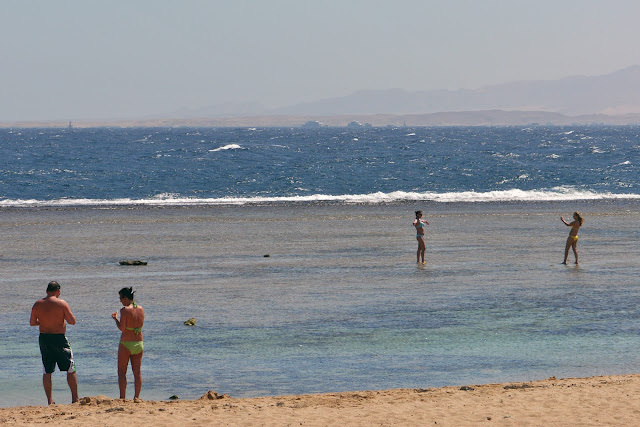 A couple of years ago I visited Sharm el Sheikh on the Sinai Peninsula together with my family. The town was filled with tourist from all around Europe, I could hear people speak Russian, English, Swedish, Norwegian, Dutch and even some Arabic. The temperature was quite nice and most of the tourists gathered at the beaches were they enjoyed the sunshine and the sea.

I came in contact with one of the Egyptians who worked at the facility. When I had talked to him for a while I asked him the following ironic question:
- Are there similar tourist facilities on the other side of the Gulf of Aqaba and can women wear bikinis there?
He didn't understand my irony, and his answer was quick:
- No, no, it's Saudi Arabia on the other side they practice a fundamentalist form of Islam and women aren't allowed to dress in bikinis or swimsuits there, they have to cover their whole bodies. He made a sweeping gesture with his arm over the beach to emphasize what he just said.


That's when he realized that two Russian women in bikini took photos of each other on the reef. The reef is very vulnerable to damage and it's forbidden to walk there. He ran away from the conversation and started to yell in English that they had violated the ban to walk on the reef. The Russian women didn't understand him and waved cheerfully to him and continued to take pictures. The Egyptian got angrier and angrier. A Russian man who could speak English came to his aid and informed the women that they wasn't allowed to walk on the reef.